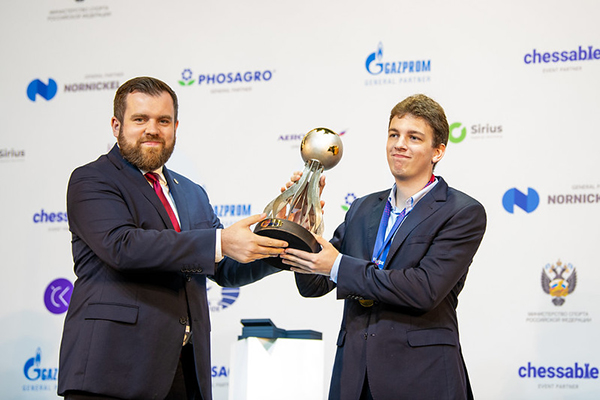 Alexey Morozov, Deputy Minister of Sport of the Russian Federation: “This wonderful competition is now over after having been underway for almost a month. Notwithstanding the pandemic challenges we are experiencing now, the organizers did their best to make this tournament safe and stay in our minds forever. It looks like a real feast of chess to me. The Russian people are historically very fond of chess, and it is no wonder that this event has attracted fans’ attention. I would like to congratulate the organizers and participants for having excelled with an exciting fight."

FIDE Vice-President Nigel Short: “I would like to thank everyone involved in organizing this incredible event. I thank the Russian Federation Government, administration of the Krasnodar Krai and the city of Sochi, the Ministry of Sports of the Russian Federation. My special gratitude goes to the Chess Federation of Russia for the excellent work performed. No tournaments are known to do without sponsors. This time the competitions were supported by Gazprom, Norilsk Nickel, PhosAgro, Chessable and Rosatom. Being a chess player myself, I found watching the players' performance extremely pleasing and interesting. I would like to congratulate all winners and even more so Jan-Krzysztof Duda on this fantastic achievement. "

Alexey Chernov, Minister of Sport of Krasnodar Krai: “A month of chess battles in Sochi has come to an end. I am glad that despite finding ourselves amidst a difficult epidemiological situation, together with FIDE we managed to organize this tournament, and, thanks God, all the participants are safe and sound. On behalf of the Krasnodar Krai Governor V. Kondratyev let me congratulate grandmasters and organizers on making it successfully to the tournament finish line and also add that we are looking forward to seeing all participants in the Krasnodar Krai in future."

Mark Glukhovsky, CFR Executive Director: “I share the above acknowledgments and would like to add special thanks to the Krasnodar Krai doctors, who helped so much to bring this tournament home successfully. This applies to doctors of Sochi and Krasnodar in equal measures."

Mark Glukhovsky also announced prize awards from Gazprom for the best games played in the open and women's tournaments. The nominees were Aleksandra Goryachkina for her game against Antoaneta Stefanova and Magnus Carlsen for his victory as Black over Vladimir Fedoseev.

Laurent Freyd, Chief Arbiter summed up the results and briefly recalled the course of the event with some statistical data. The medalists got medals, and the tournament winner, Jan-Krzysztof Duda, received a custom-made cup from FIDE Vice-President Lukasz Turlej.

In the return speech, Jan-Krzysztof Duda said that he could never have imagined winning this tournament, thanked the organizers and highlighted the warm attitude of local chess fans.