Return games of round three finished in Sochi. 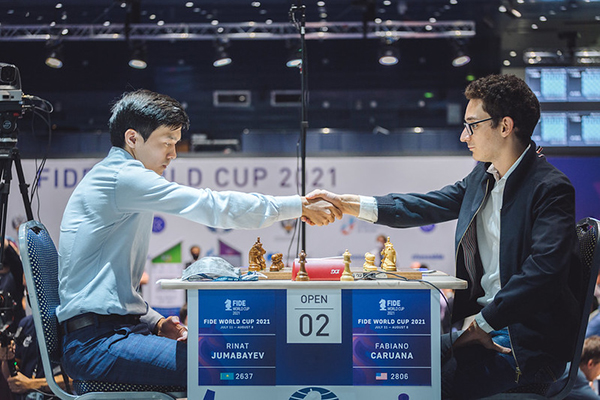 July 19, round three games of the Open and Women's FIDE World Cups finished in Sochi.

The tournament number two Fabiano Caruana’s (USA) going down as White to Rinat Jumabayev (Kazakhstan) has become the major upset of the round. The first game being a draw, the final score has become 1.5:0.5 in Jumabayev’s favour. The American GM, the 2018 world vice-champion, is out of the tournament.

In an incredibly intense battle Miсhal Krasenkow of Poland has defeated the Indian prodigy R. Praggnanandhaa to equalize the score. Jeffery Xiong managed to come back against Nils Grandelius. In the Indian derby, Adhiban – Vidit, the victory went to the white player: this match also goes into a tie-break. The Russian Pavel Ponkratov and the Azeri Shakhriyar Mamedyarov managed to win on demand over Jakhongir Vakhidov of Uzbekistan and Haik Martirosyan of Armenia, respectively.

Nana Dzagnidze (Georgia) managed to confuse her opponent Carissa Yip (USA) to achieve the coveted victory by resorting to an unorthodox opening approach. The game goes into a tie-breaker. Besides, yet another three matches go into tie-breakers as well.