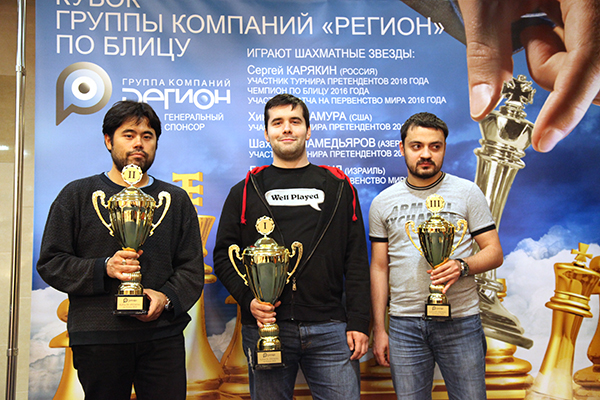 A traditional blitz Cup of the Group of Companies REGION took place in the Cosmos Hotel, Moscow, on March 1. The tournament is one of the most famous blitz competitions in the world.

This year, the tournament's line-up was one of the strongest in its history: among those who were fighting for the prizes were the participants of the forthcoming Candidates Tournament 2018 Sergey Karjakin (Russia), Hikaru Nakamura (USA), Shakhriyar Mamedyarov (Azerbaijan), well-known masters of blitz Vladislav Artemiev, Dmitry Andreikin, Ian Nepomniachtchi, Daniil Dubov (all from Russia), a legendary Boris Gelfand (Israel), winner of the blitz Cup of the Group of Companies REGION-2017 Anton Korobov (Ukraine), many other titled chess players, and the promising youth.

In general, more than 200 chess players from 28 countries took part in the event.

Executive Director of the Russian Chess Federation Mark Glukhovsky: "Cup of the Group of Companies REGION is the strongest blitz tournament in Russia. This year, several top-level blitz stars were taking part in the tournament - World Blitz Champion 2016 Sergey Karjakin, the American grandmaster Hikaru Nakamura, and №2 of the FIDE rating list Shakhriyar Mamedyarov. It is difficult to overestimate my gratitude to the Group of Companies REGION, which has supported this wonderful chess festival for several years".

The prize fund was 20,000 euro. The participants played 9 double rounds according to the Swiss system.

Partner of the Group of Companies REGION Andrey Zhuykov: "Holding a blitz tournament has become a tradition for our company. Outstanding grandmasters added fascination and intrigue to the tournament this year. Ability to play chess has been considered a special gift and an indication of intellect since ancient times because, according to the “Comprehensive Soviet Encyclopedia”, chess organically combine the features of art, science and sport. We thank all the participants for their play!"