Andrey Filatov: National Team is in for Renewal

Interview of Head coach of the Russian men’s team for 64 – Chess Review magazine. 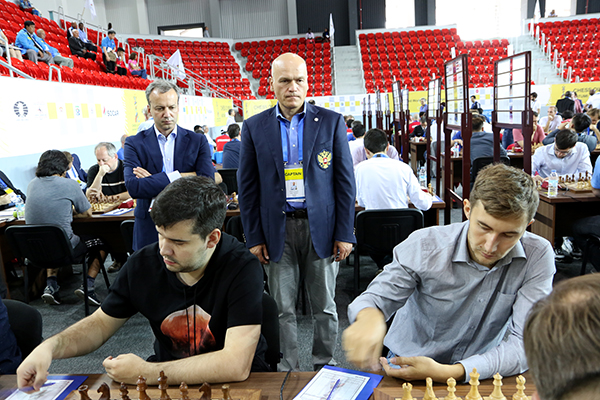 - Andrey Vasilyevich, your experience as a national team’s head coach now includes two Olympiads, the World and European Team Championships. How do you rate performance in the above events?

- I rate it as decent in general. There has been no single event leaving us without medals, be it the bronze at the Olympiads, silver medals at the World and European Championships.   The latest Olympiad, same as that of 2012 in Istanbul, has had the final standings and prize places defined by tie-breakers. Men's teams China, USA and Russia ended up sharing points in Batumi. It goes without saying that we have hoped for more; however, the ever-increasing competition is bound to give us a realistic assessment of the situation. Any medal at present should be assessed as a positive outcome. Alternatively, lack of any is a failure. 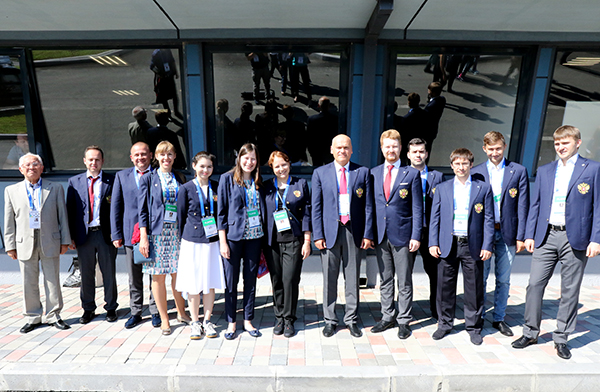 Russian teams before the 1st round of the Olympiad in Batumi

- Let us talk about the latest Olympiad. How come the only world champion in our team's lineup, as well as its rating favorite, ends up seated board three?

- Beginning with the Candidates, Kramnik has demonstrated uneven performance, dropping rating points through losing many games. A lot of though was given by coaches as to have him up and running again.  We have decided to seat him below Karjakin and Nepomniachtchi, and our expectations have come true in general. With 6.5 out of 9, Vladimir has not lowered his rating.  Board three is an extremely hard nut to crack in this respect! Unfortunately, he did lose a game, but in general his performance gives you positive feelings, with a couple of vital victories to strengthen them.

- Did he take well to the decision to place him board three? How sharp the discussions in the coaching staff used to be?

- It was a tough decision to make, and Kramnik, of course, was far from happy to hear it. Still, someone is bound to take responsibility in the end. This is what the chief coach is for. We start by giving the problems to players and members of the coaching staff to discuss at length. However, once the decision is adopted, it needs to be implemented.

This year the coaching staff with Alexander Motylev has been beefed up with Alexander Riazantsev. Both training sessions and the competition itself had them showing their best, always hard at work.  Vladimir Potkin worked double tides, assisting women and not neglecting his main trainee, Ian Nepomniachtchi. And, of course, I want to address words of gratitude to Boris Naumovich Postovsky - he literally lives our team’s life, aware of everyone’s problems and ready to come to everyone's help. His experience and inner strength inspires everyone keeping in close touch with him. 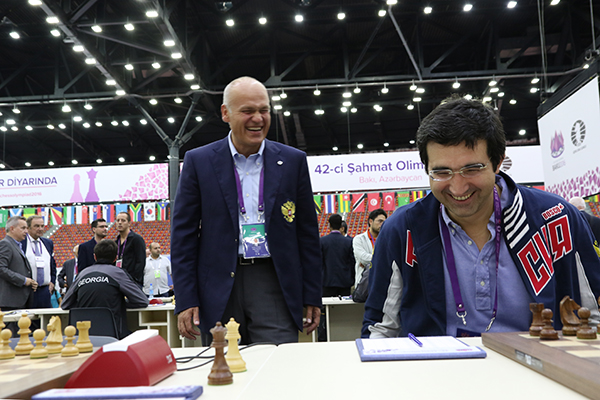 - What is your take on other players’ performance?

- Sergey Karjakin stood his ground in all games, which is above all for a board one player. Besides, he still had an aftertaste of St. Louis – the worst tournament in his career so far. On the other hand, he failed to convert a couple of games against much lower-rated opponents, which is annoying. In general, however, he fulfilled our objective of not going down.  However, the fact of his dropping rating points speaks visually about itself. It goes to show that Sergey will unlikely add this competition to the list of his achievements.

- The only player entitled to any enjoyment here is, perhaps, Ian Nepomniachtchi, right?

- I absolutely agree with you! Having been the best team player for many years now, he has confirmed this status yet again by scoring five games (versus several strong grandmasters among them), raising his rating and otherwise helping our team out from difficult situations on many occasions. He has never let us down, not even once! I do hope his individual performance will match that for the teams in the near future. Alas, there are not a few players performing worse for the team than for themselves. It takes at least two grandmasters showing their best for the team to take gold. This is not the case so far as the team is in a bad need of “another Nepomniachtchi.” 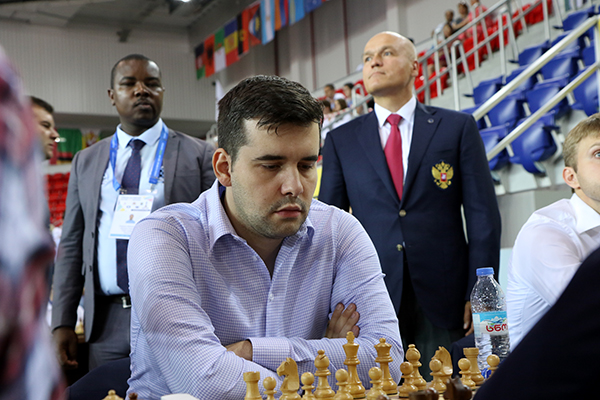 - What can you say about other players? Having the hindsight of events, do you regret your choice now?

- Nikita Vitiugov has not shined, but covered the distance without defeats.  I may sound like a broken record, but this is prerequisite for a successful team performance. With no one losing, and someone likely winning, this is going to work.  Especially with as many as four players on the team. As for Dmitry Jakovenko, only he can explain what went wrong with him. It may be due to his excessive desire to make it back to the team... However, when his desire finally materialized – and he has had a fantastic year, mind you! – his nerves ended up failing him. We need to keep in mind that this grandmaster is known to perform rather successfully for the national team, and going into the tournament it was him that I felt confident about.  As they say, the trouble came from where less expected - following two defeats from much inferior opponents we could no longer include him in a team’s roster. I hope he will come back - Dmitry is a very strong chess player and a worthy person. 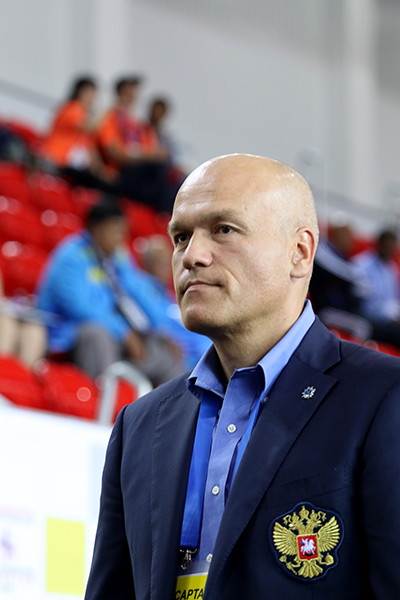 - The team’s lineup was criticized far and wide, as they say. On the one hand, why neglecting Svidler and Grischuk? On the other hand, why not recruiting young and hungry for success, such as Fedoseev, Dubov, and Artemiev?

- As for the former, we have discussed their team membership at length. There is no one doubting their high class or the status of outstanding players. However, just try to recall the last time they performed successfully for the national team? Not off the top of your head... Svidler did not shine at the team world championship in Khanty-Mansiysk. Grischuk is a time trouble addict and cannot get it over with. Having played so many times for the team by now, I think they have partially lost taste of it. Therefore, we believed that Vitiugov and Jakovenko, rarely playing for the team, would be more hungry and avid for victories.  It did not pay off, unfortunately. 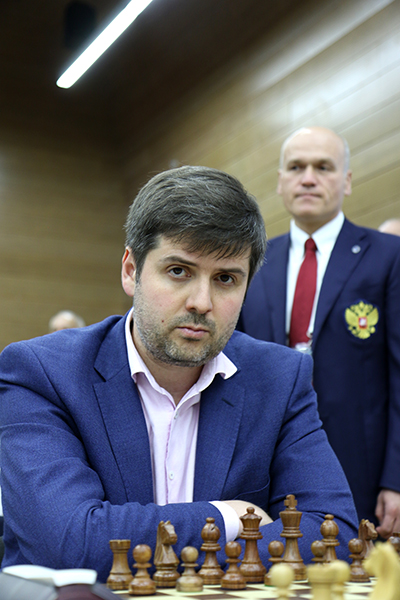 As for young grandmasters mentioned by you before, the coaching staff has been looking forward to having them on the team for quite some time now. They regularly participate in team training camps and the Nutcracker tournament, which, in essence, has been launched for “running in” of youngsters. Besides, as you know, they have participated in a number of team events. The thing is, our young pool will not make it to a consistently high level, which begins with 2730. Sometimes it feels like someone is ripe for the team by all means, and you mentally place him on the national team list... Once you do it, he immediately fails your expectations.

Our desire to be on the safe side and our excessive belief in class and stability is, perhaps, our undoing. Conversely, we just need to go for it by believing in someone... The national team needs rejuvenation anyway, and it is before long that the national team is going to embrace not only the names mentioned by you, but completely new ones as well. 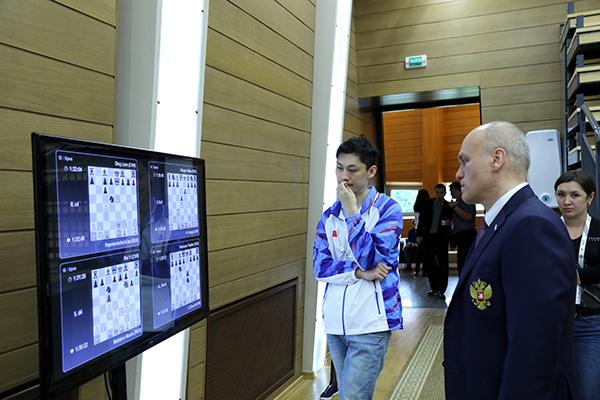 - Do you mean anyone in particular?

- We have a splendid generation of young grandmasters rising now. Many of them train in Sirius, participate in training team sessions, and work to their individual programs.  This is, first of all, about Andrey Esipenko, Semen Lomasov, as well as about other worthy boys and girls. They take medals at youth competitions and U16 Olympiads. There is no effort spared in the work on having new members prepared for the national team - taking responsibility for it in our chess federation are such experienced specialists as Sergey Janovsky and Mikhail Kobalia. Their trainees have taken several dozen medals in recent years. This is why I believe in the Russian team's good perspectives at the upcoming team competitions. The next Olympiad is taking place in Khanty-Mansiysk in two years from now. It gives us enough time to assess the curve of our young grandmasters’ progress. Being an organizing country, we are entitled to put out more than one team. I think the rivalry between different generations of chess players promises to be very tense and exciting. 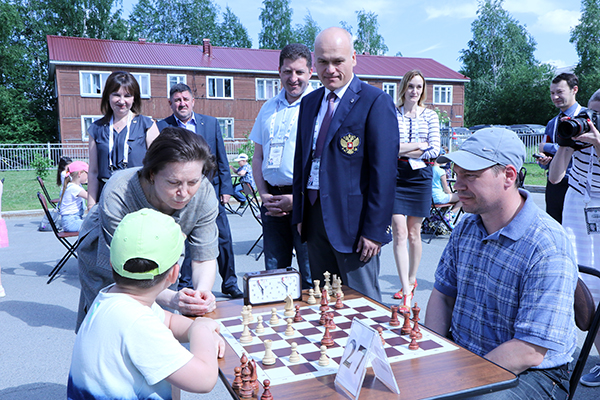 - The Olympiad has just finished, and here you are making plans for the next one, aren’t you?

- Three weeks of team-work makes an event everything to you. One literary stops paying attention to anything else.  Anyone connected with chess and chess players knows how deeply one gets involved and how long it tends to keep you on the hook afterwards.

An amazing peculiarity of chess is that it keeps a person's company across an entire life, adding taste, interest, and thrill to life. 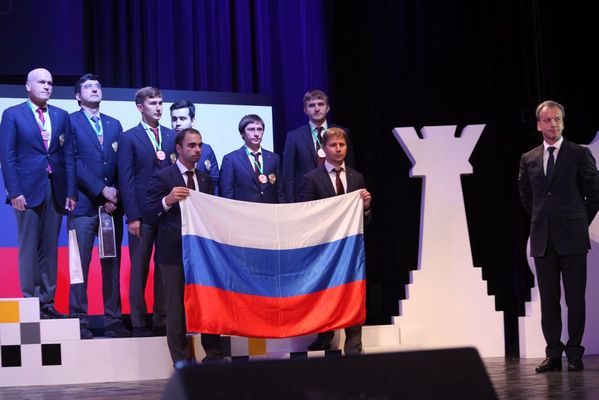