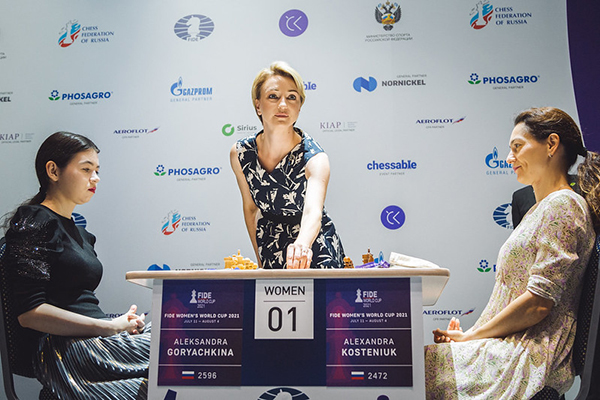 August 1, the semifinal and final/third-place matches of the FIDE Open and Women’s World Cups, respectively, began in Krasnaya Polyana.

The symbolic first move in the Aleksandra Goryachkina vs. Alexandra Kosteniuk game was made by Polina Lion, the Rosatom Chief Sustainability Officer.

Polina Lion highlighted that being a high-tech corporation, Rosatom is happy to support such an intellectual sport as chess.

The first game of the final match between Aleksandra Goryachkina and Alexandra Kosteniuk saw the Catalan opening. The ex-world champion opted for one of the sharpest continuations for Black to contest for space on the queenside. Nevertheless, White's pieces were better coordinated, and the vice-world champion gained a certain edge. Kosteniuk sacrificed a pawn to free up her play and activate the bishops, and Goryachkina not only won the material, but also generated a dangerous attack against her opponent's king. Good advice seemed beyond price for Black already, but the position remained very sharp, and White failed to find a forced victory shortly before time control. Black managed to consolidate and thwart immediate threats, and a few moves later she seized the initiative completely. Here Kosteniuk pardoned her opponent by exchanging queens instead of continuing the offensive. Nevertheless, the endgame struggle with rooks and same-colored bishops was dictated by Black. In a severe mutual time trouble, Goryachkina blundered again, and her king walked into a mating net. Alexandra Kosteniuk won the game on move 63.

In the match for third place, Tan Zhongyi and Anna Muzychuk played out a fashionable line of the Tarrasch Defense in which Black immediately lures the opponent’s queen into the center. It is noteworthy that the same continuation occurred in Fedoseev – Karjakin, but the middlegames of those fights went their own ways. In an attempt to mount pressure due to her more active pieces, Tan traded her opponent's isolated pawn, but Muzychuk neutralized all threats with precise play. Following a series of exchanges there remained no pieces but queens: a draw was agreed by a perpetual check after Black's move 42.

“It's of interest that same line happened in two out of four games! It seemed to me that other players would turn to our game before making some of their own moves!" – Vladimir Fedoseev noted with a smile after the game. The Russian GM noted that he did not really like the plan chosen by Tan Zhongyi and decided to keep the isolated d5-pawn on the board instead. The opponents maneuvered and performed with a substantial margin of safety, but White enjoyed a certain amount of pressure nevertheless. Karjakin decided to simplify the position and transposed into a rook ending down a pawn, in which his remote passed pawn compensated for the lack of material. Black defended precisely and achieved a draw.

Magnus Carlsen and Jan-Krzysztof Duda played out the Vienna variation of the Queen's Gambit, where White opted for the popular central pawn sacrifice; the Polish GM already tested it at this tournament against Alexander Grischuk. The Russian player attempted to create a kingside attack, but had to put up with a draw by perpetual check; however, the world champion chose a different plan, hoping to exploit his opponent's pawn weaknesses. White soon won back the material and maintained positional pressure; Black needed to find several precise moves to maintain balance. A draw was agreed on move 32 in an equal rook ending.

The return games are scheduled on Monday, August 2.