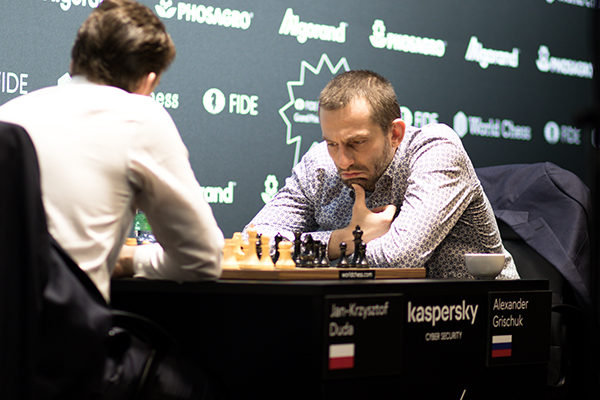 The FIDE Grand Prix leg organized by World Chess in Hamburg finished with a tiebreak of the final match between Alexander Grischuk and Jan-Krzysztof Duda.

The Polish grandmaster won the first rapid game but the Russian managed to fight back in the second encounter. After that, Grischuk defeated his opponent in the first "10+10" game and then, in the second game, he fixed a draw from the position of strength.

Alexander Grischuk won the final match with a total score 3.5-2.5 to become the triumpher of the FIDE Grand Prix leg in Hamburg. The Russian player scored 10 GP points and now leads the series with 20 points. His closest pursuer Maxime Vachier-Lagrave is 7 GP points behind. Shakhriyar Mamedyarov has scored 10 points, while Ian Nepomniachtchi has got 9 points.

The final FIDE Grand Prix leg will take place in Jerusalem on December 11-23. Alexander Grischuk won's take part in it, but his pursuers will play in Israel. It is to be reminded that a participant gets 1 GP point by qualifying for the quarterfinals, 3 points by advancing to the semi-final and 5 points to the final, while the winner scores 8 points. Besides, a player gets 1 point for each match won without a tiebreak. Thus, the winner of each GP leg may gain maximum 12 points and finalist 8 points.

Two players with most Grand Prix points will qualify for the 2020 Candidates Tournament, which will be held in Yekaterinburg from March 15 till April 4.

Our congratulations to Alexander Grischuk on his brilliant victory at FIDE GP leg in Hamburg!