The Superfinals of 71st Russian men's championship and 68th Russian women's championship will take place from 24th August till 6th September 2018 in Satka, Chelyabinsk Oblast. The tournament is a part of the Chess in Museums program, carried out by the RCF together with Timchenko Foundation since 2012.

Total prize fund is 9,000,000 roubles. Besides, the winners of both men's and women's tournaments will also receive a special prize – bright and stylish city crossover Renault Kaptur.

The tournaments are round-robin events with 11 rounds. The default time is 15 minutes. If a player arrives at his/her place after a chess clock was started, but within first 15 minutes, he/she shall be fined at a rate of 10,000 roubles.

In case of a tie for the 1st place by two or more participants, an additional rapid competition is played to determine the winner.

During the Superfinals, the exhibition of the Soviet and Russian painter, a representative of the “Severe Style” Geliy Korzhev (1925-2012) will be opened in Magnezit Palace of Culture. The exposition called Painting’s Way. Geliy Korzhev will include sketches and graphics from the archive of the artist's family. The sketches and graphics were made by Korzhev during the work on his key paintings on historical, biblical and other series from 1953 till 2012. 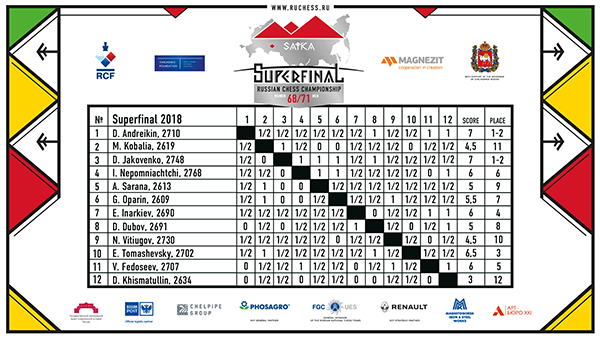 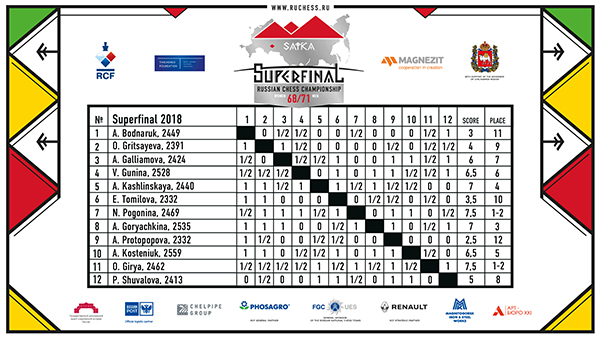